According to a study published in Cell, researchers have developed a specific inhibitor for KRASG12C called ARS-1602 that induced tumor regression in mice.

KRAS mutations are the most commonly mutated oncogene and prior research has shown that approximately 30% of tumors contain RAS mutations. Specific KRAS mutations dominate within specific tumor types. For example KRASG12C is a predominant mutation in non-small cell lung cancer (NSCLC), and it is also found in pancreatic and colorectal adenocarcinomas.

Despite the prevalence and decades of research highlighting mutant KRAS as a central driver of tumorigenesis and clinical resistance, mutant KRAS has been a stubborn target.

A variety of strategies have attempted to identify small molecules that target KRAS, but they have resulted in limited suppression of KRAS in cells. This motivated the authors to design a compound to improve KRAS-specific inhibitors, including the switch 2 pocket (S-IIP) KRASG12C inhibitors that bind to and react with the GDP-bound state of KRAS, trapping it in an inactive conformation.

To be effective, the inhibitor must have high potency and rapid binding kinetics. It also must have optimal pharmacokinetic properties to maintain exposure and duration for a long enough time to capture the GDP-bound inactive state of KRAS undergoing a rapid nucleotide cycle.

The investigators designed and synthesized ARS-1620 with drug-like properties, and improved potency over first-generation compounds. Effectiveness and kinetics across cell lines with the mutant allele were then assessed to determine if target occupancy to inhibit KRAS-GTP in tumors was sufficient.

Inhibition of cell growth, as well as the possibility of non-specific reactions which could indicate the potential for toxicity, were evaluated.

Finally, to assess target occupancy in vivo, oral ARS-1620 was given to mice with established subcutaneous xenograft models bearing KRAS p.G12C as a single dose, or daily for 5 days.

The investigators reported that ARS-1620 significantly inhibited tumor growth in a dose- and time-dependent manner with marked tumor regression.

In five xenograft models of NSCLC cell lines in mice, all models responded after two to three weeks of treatment, and four of the five exhibited significant suppression of tumor growth. In addition, ARS-1620 was well tolerated with no observed clinical toxicity during the treatment period.

“Collectively, the in vivo evidence that ARS-1620 is broadly efficacious as a single agent across NSCLC models provides proof of concept that a significant portion of patients with p.G12C KRAS mutations may benefit from KRASG12C-directed therapies,” stated the authors.

They added that ARS-1620 is a direct KRASG12C small molecule inhibitor that is potent, selective, orally bioavailable, and well-tolerated. 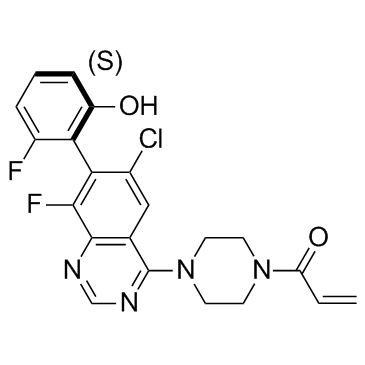